The Tea Party by Remedy's Farhana 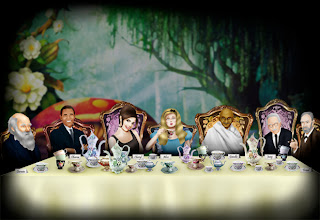 Last night I had the strangest dream, I dreamt I was Alice sitting at a tea party with great influential characters from past and present. All discussing world politics and issues whilst dunking custard cream biscuits in cups of Earl Grey tea. Darwin kicked off by reciting his quote from his book The Decent of Man;


“At some future period, not very distant as measured by centuries, the civilized races of man will almost certainly exterminate, and replace, the savage races throughout the world. At the same time the anthropomorphous apes ... will no doubt be exterminated. The break between man and his nearest allies will then be wider, for it will intervene between man in a more civilized state, as we may hope, even than the Caucasian, and some ape as low as a baboon, instead of as now between the Negro or Australian and the gorilla” (Darwin 1887:156).

Cheryl Tweedy interrupted and said that Darwin was not racist, he was just a product of his time, but then paused and thought to herself, then added “hold on William Wilberforce was around at the same time as Darwin and he fought for racial equality, so how could Darwin be a product of his time when people had realised back then that racism was wrong?” She then shook her head as if to shake the question out of her head and offered me some candy pink lip gloss, and said that I was worth it.

I politely refused and turned to Obama who was talking about Mary Seacole, who was just as incredible as Florence Nightingale but never got the recognition, even though she had to work twice as hard and had to fund herself in order to help those injured in war. He then spoke about Jeanette Rankin who fought for women’s rights and campaigned for peace. Freud, who was listening in on the conversation, remarked on how incredible that was whilst Young spoke over him and recited one of Freud’s famous quotes;

"Women oppose change, receive passively, and add nothing of their own," (Freud 1925 paper entitled ‘The Psychical Consequences of the Anatomic Distinction Between the Sexes’).

Just then I found myself sitting next to Gandhi. The dream turned in to a nightmare as excitement overtook the control of my mouth and I uttered the most embarrassing comment, and to top it off, in a Star Wars fanatic manner, “ I love the bit when king George V, who did not understand that the clothes you wore were to symbolise the oppressed poor people of the world, publicly made a negative comment on what you wore when you went to meet him, and you said ‘the king was wearing enough clothes for the both of us’ that was so cool Gandhi.”  I woke up in a cold sweat of horror! Oh the shame! But then complete relief as I realised it was just a crazy dream.

It did get me thinking though, through this bizarre tea party, I saw that no matter how incredible I think someone is, I have to look at all aspects of them, everything they had to say and everything they chose to do, if I’m going to look up to them. Always stay open minded, take the good things you’ve leant from them and learn from the bad. Not to just brush the bad bits under the carpet. Don’t we all deserve the best role models? Because we are all worth it. Tea anyone? 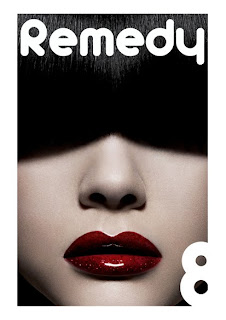